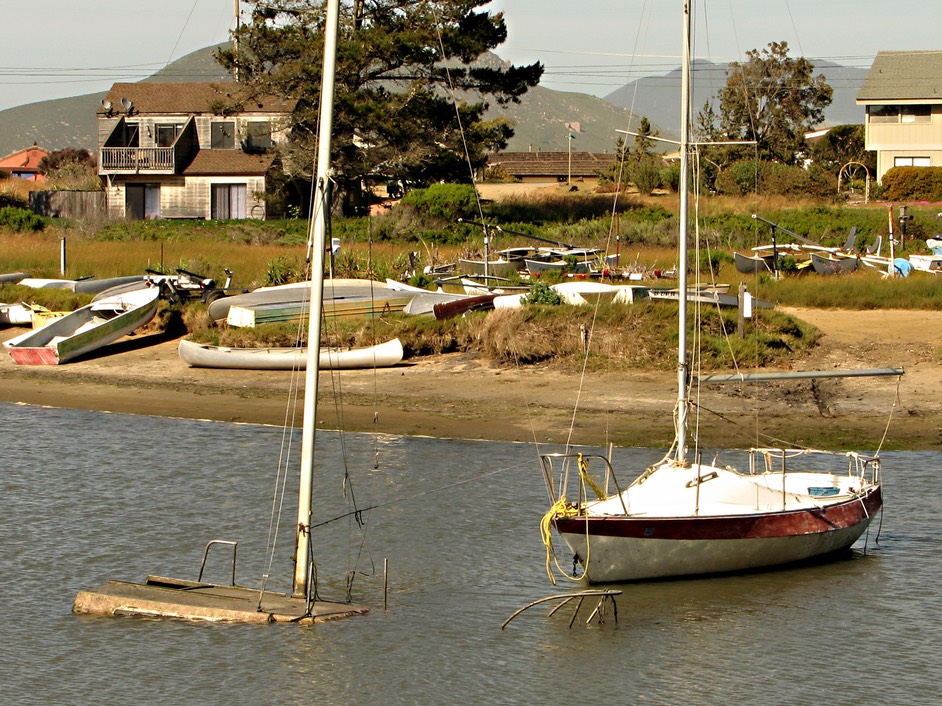 Cuesta Inlet is private property, and the owner has been very generous in allowing people to store and launch their boats there.

Because in recent years there has been an increasing amount of litter, an accumulation of derelict boats and trailers, and animal waste left on the land, a joint effort was launched to clean up the inlet. The first cleanup occurred in 2010-2011 and there have been others since then. Celebrate Los Osos has taken on the project of keeping the area clean and the boats in compliance with the owner’s requirements.

All boats were inventoried and an official notice from the County’s Enforcement Division and a flyer from Celebrate Los Osos was placed in a waterproof plastic bag and taped to each of the 287 boats and trailers located at Cuesta Inlet. Four signs were posted around the site to notify local residents, walkers, and boat owners about licensing, identifying, securing boats, and removing trailers and derelict boats.

A massive cleanup was held with over 125 volunteers — our community at work. Boats failing to comply with the owner’s regulations, and all trailers, were moved to an impound area along Doris Avenue for 30 days pursuant to SLO County code.

Boats and trailers remaining in the impound area were declared abandoned and were auctioned to the highest bidders. Proceeds from the be auction went towards raising and disposing of a sunken boat and disposing of the derelicts.

As part of the California Coastal cleanup, 125 volunteers pushed, pulled, carried, floated, dragged, totted, towed, and otherwise deposited about 4000 pounds of junk in a roll-off, and nearly 18,000 pounds of boats and trailers were moved to an impound area.

Thank you — to all the great volunteers, who helped clean up Cuesta Inlet!!!  We made a difference!

Judy Carroll, a Celebrate Los Osos volunteer, has produced a wonderful short video about the Cuesta Inlet boat cleanup. It shows the inlet before and after and how incredibly successful the effort was.   You can find it on YouTube.

The final phase of the Cuesta Inlet cleanup was completed.

On the 15th, a small sailboat, that had been sitting sunk in the channel for about five years, was floated and brought to shore by volunteer divers under the supervision of Chuck Rawlinson of Depth Perceptions of San Luis Obispo.

The boat was floated using six salvage pillows and the hull was pumped to remove water and sludge. It was then pulled to shore.

On the 17th, the sailboat and all the other unclaimed boats were crushed by equipment and crew provided by Al’s Septic Pumping Service. The sailboat’s salvageable material was collected for recycling and the remaining debris was then loaded into roll-offs for removal to a landfill.

Thank you — to all the great volunteers who helped clean up Cuesta Inlet! We made a difference!

Three times during 2015, notices were placed on all out-of-compliance boats, requesting boat owners to license and place contact information on their vessels.

On Sept 19th, 15 Celebrate Los Osos volunteers, along with a platoon of 21 Grizzly Academy cadets and their Sergeant, inspected all 221 boats at Cuesta Inlet. Each boat was inspected for name and contact information. Those boats requiring a CF number and registration, plus contact information, were also re-inspected for proper licensing. The mix of boats included 74 canoes, 101 kayaks, 29 sailboats, and three boards.

Again, thanks to all the volunteers and the Grizzly Academy for another cleanup.